The reason for this conclusion can be that:

When placing the hinges it is good to keep the following in mind: 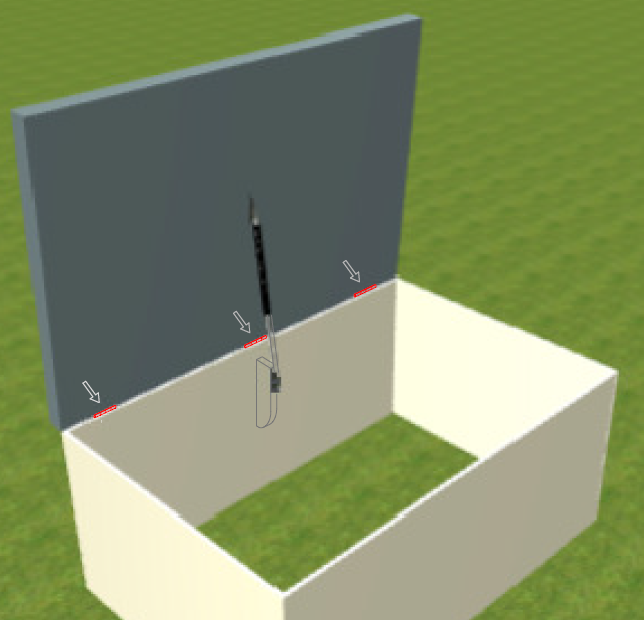 In general, therefore, the following applies: Attach a hinge as well as possible in line with each gas spring.

When this condition is met, then the load (force) per hinge is equal to the force at the pivot point divided by the number of gas struts.

This means that when we apply one gas spring, the whole force at the pivot point of the cover given by the Calculation tool, must be able to be led through one hinge to the non moving part.

If, however, we mount one gas strut halfway the width of the cover, without a 3rd hinge right behind the gas spring, then the force at the pivot point of the cover given by the Calculation tool will, nevertheless, be divided over two hinges but then the stiffness of the cover is required to lead that force to the left and to the right towards the hinges. A disadvantage here, because of the lack of the 3rd hinge, is that the cover at the location of the middle-mounted gas struts may bulge, because the gas spring continues to exert a constant pressure on the cover when the cover is closed. Especially with a wooden cover this bulge will, in the course of time, be explicitly visible (wood simply bends).

A question that can be asked afterwards is the following: “Does it make sense to mount, for example, 4 hinges whilst I am only going to apply two gas springs?”

Answer: That definitely makes sense but the hinges that are placed right behind the gas struts jointly transfer the force at the pivot point of the cover, given by the Calculation tool, to the non moving part.

When all the above are met and the load per hinge is still considered too high, what can still be done to reduce the force per loaded hinge?

10
Walked me through the process